If you follow golf conversations or often like to be part of them, you might have heard of the reverse K swing mentioned. It’s not one of the most talked-about topics in golf, but it’s a great conversation starter. If you’ve heard of it somewhere and are wondering what it means, you’re in the right place.

In this post, we’re going to explore the effectiveness of the reverse K position in the golf swing and teach you how you can master it.

How Did the Reverse K Golf Swing Position Come About?

While we won’t go to the roots of this technique, we’re going to look at a great example. We all know Rory Mcllory. He’s considered one of the best drivers in golf currently.

Although he has a small build, around 5’9” and 170 pounds, he crushes tee shots over 300 yards! And part of the process requires the reverse K swing technique.

To fully utilize this technique, you’ll also need to improve your swing speed. Paired with the power that can be generated from the ground with this technique, you can easily hit 300 yards or at least speed up to a faster golf swing that gains you distance off the tee.

What is the Reverse K Swing? 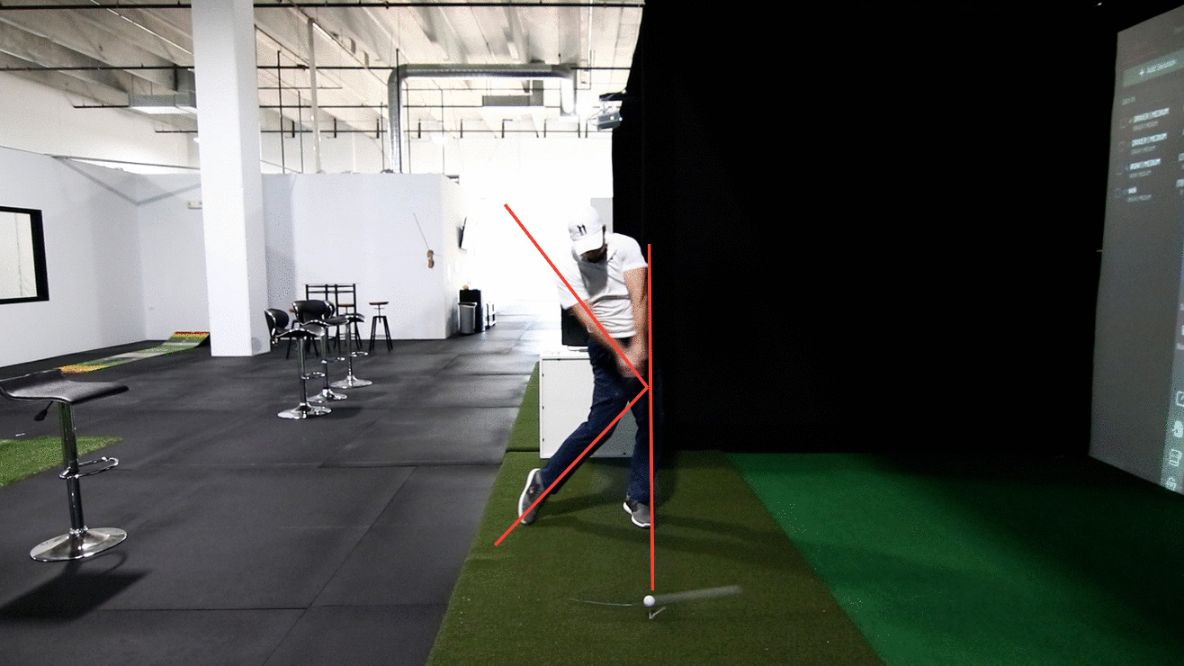 The first thing we need to understand is what is the reverse K in golf. If you’re a right-handed player, your right shoulder will be slightly below your left shoulder. The opposite will happen if you’re a left-handed player.

Whatever the case is, both players tend to keep their hips level at address. As your leading hand is going to grip the club over your trailing hand, there’s no way to keep your shoulders level. It essentially means your shoulders and the hips are resting over the ground in two different positions.

This discrepancy between the angles creates problems for players to generate force. It’s obvious when you think about it. You can’t harmonize your lower body with your upper body to fully transfer the power to the club.

That’s where the reverse K comes into play. In this technique, the player pushes their hips slightly toward the target. The intensity of the push will depend on how far the trailing shoulder is angled downward. When the player is comfortable with the adjustment, it’s the right amount of push for the hips.

That’s what the reverse K position is all about. You adjusting your stance to make sure you can hit explosive shots in the right direction.

At the first glance, it all looks simple enough, right? However, mastering this technique is not as simple as it looks.

Everything You Need to Do to Master the Reverse K

In this section of our guide, we’re going to look at the things that you need to adjust to completely master the reverse K. The time it’ll take for you to get acquainted with this shot will vary from player to player.

The first obvious adjustment you need to make is in your setup. You can do it as you would normally do with one exception. You need to bump your hips slightly to the target. If you feel that your hips and your shoulder are on the same angled plane, you’re in the right position.

We’ve seen a lot of players not bend their knees enough at address. It’s one of the things you need to avoid if you want the reverse K to work. Because if you stand up before you contact the ball, the K will not be a K anymore.

When you angle your hips with your shoulders, you’ll automatically feel the ease of power generation from the ground. You can push the ground with your front foot better than before.

As this technique is mostly targeted to long range shots with drivers and woods, you’re going to shift your upper body behind the ball at address during the set up.

Make sure that you don’t overdo it. If you push your hips too far forward, it’ll create a different set of problems. If you’re not sure what you’re doing, you can ask a fellow player to spot you. Or, you can simply record yourself to see if you’re doing it right.

Reverse K with the Driver

Reverse K technique is arguably most effective for tee shots. Although we personally  believe you can benefit from this technique for all of your shots, the improvements are most noticeable when it’s with a driver.

Make sure you’re setting up for the shot right. Place the ball where it’s supposed to go for driver swings, which is on the inside of your front foot.

Address the ball as you would normally do. Now, push your hips slightly toward the target. You can visibly notice that your upper body is getting behind the ball on the tee.

Square up the club face and begin your swing. As you’re performing your backswing, you’ll notice that your range of motion has improved. You’ll be able to control your twist better to transfer the power from your lower body to your upper body during the downswing.

Hit the ball. If you played your cards right, your trajectory should improve noticeably. Also, you’ll see a bump in your total carry as well.

Woods are also designed for long distance shots. Players often use their 3 woods instead of the driver it’s a 3 par hole. The setup and the posture are pretty much the same for drivers and woods. You’re going to change the ball position and your distance with the ball.

For a perfect shot with woods, the ball should be pushed back toward your backfoot very slightly. Also, you’ll need to move closer to the ball because the shaft length on woods is less than drivers.

Keeping the same reverse K position, swing your driver. Your swing speed should increase slightly as soon as you bump your hips forward. Because it helps the upper body and the lower body to move together.

The resulting shot would be higher in distance and better in accuracy.

Setting up for irons is different from setting up for drivers or woods. Irons are generally harder to hit, even the forgiving ones. Also, irons have more loft than drivers and woods so you need to hit down on the ball purposefully.

To setup for these shots, pick the right iron for the right distance. Make sure to apply the hip formula before you swing. The ball position needs to come back significantly when iron shots are concerned.

If you manage to master the reverse K, you’ll gain immense control over your iron shots. The key is to push the hips forward just enough to compensate for the uneven shoulder pane. The force that you generate from the ground would be stronger as well.

Iron shots are not always the longest shots you hit. Accuracy is more of an essence for these shots. If you keep practicing the reverse K with irons, you’ll see improvements in both distance and accuracy.

As a player, you already know the difference in setup between irons and wedges. Wedges are even loftier than irons. They also have a property called ‘bounce’ that comes into play. For a perfect wedge shot, you need the ball centered, right underneath your sternum.

You’re going to push your hips forward as well but the swing will not be as aggressive as the iron shots or the tee shots. Rather, it’s going to be a milder stroke but with a lot more finesse. You will be able to control the backspin and the trajectory for the short distance if you apply the reverse K.

Does the Reverse K Actually Work?

It’s a debatable question. Many players swear that the reverse K has helped them get better results while another group claims that it doesn’t work. In our opinion, whether the reverse K will work or not depends on how you adapt it.

To make it work, you need to put in the time in your practice sessions. You can’t try this for a day and claim that it doesn’t work. You haven’t given yourself enough time to adapt to the skill. Our advice would be to make reverse K an integral part of your practice routine every time you hit the driving range.

As a result, the reverse K will become your primary playing style. And there are no drawbacks to that. This technique will help you get better distance and better accuracy no matter what shot you play. It’s one of those golf formulas that fit almost all problems.

Finding a technique in golf that works in almost all situations is rare. The reverse K is one of those techniques that every golf player should have in their itinerary. If you didn’t know what it was before today, you should be getting to practice after you’re done reading this guide.

Powered By MemberPress WooCommerce Plus Integration